Championing fashion design across the spectrum, our spectacular Pop up Runway promises a fashion show to remember. Expect to see your favourite South London designs on the catwalk across men & womenswear, accessories & childrenswear.

Hair and make-up on point, performance to the ready with Choze and Steel pans band carnival experience.

It is not your average catwalk experience.

Das Brass Band opened the event with a parade around Pop Brixton and each member of the band wore a top from each of the designers collections, Yemzi, Dreamclothing, Doller Creme, Shoop Doop London, YCG Lifestyle, Empress Lounge, 4649worldwide, Mulacake.

Hosted by Samuel Williams.  Designers models performers Margin Kings enjoyed the Pop Up Runway experience along with sharing Love is Power with the audience through a celebration of fashion, design and performances. 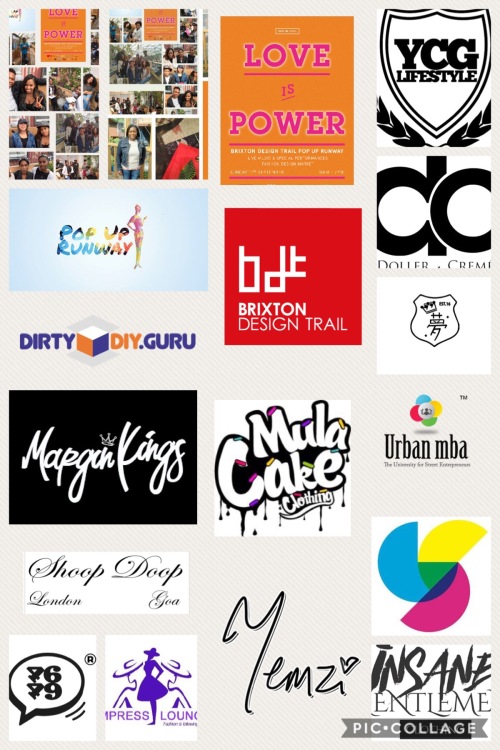 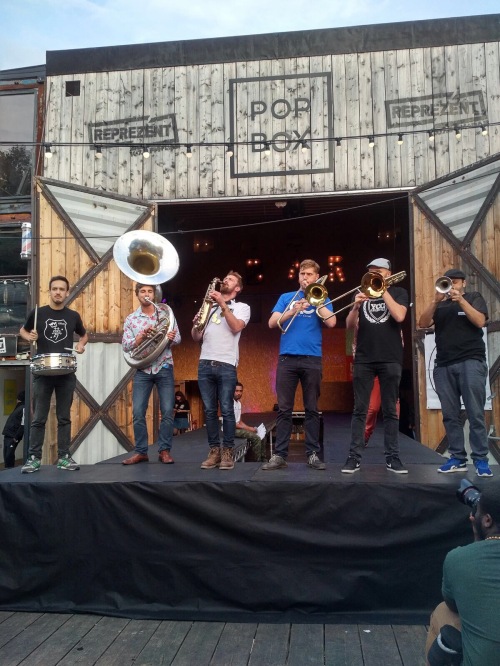 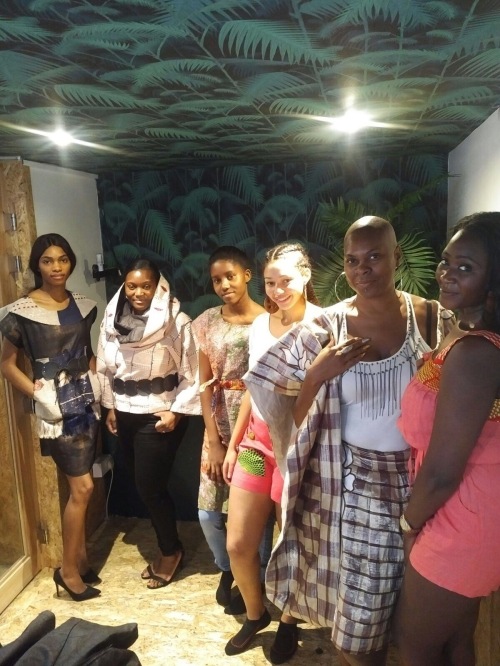 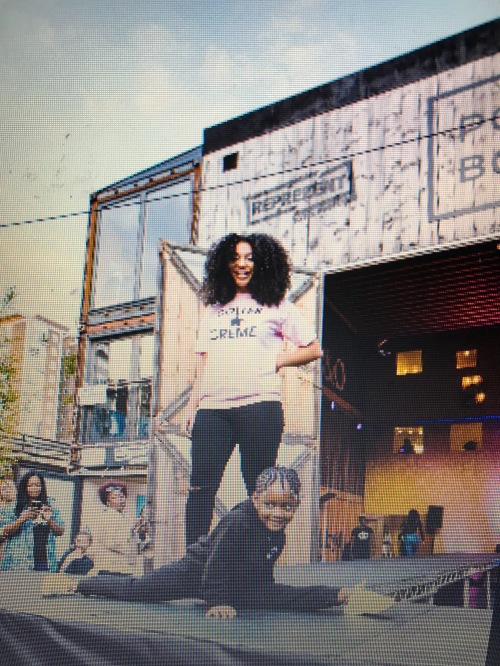 Young people are enjoying Cage Cricket Mix & Blend at Pop Fields some at first were not interested in cricket and they changed their mind when the played more Cage Cricket.  They said it was fun and they looked forward to batting, bowling, fielding and umpiring as well as encouraging each other.

Come and join us and experience it for yourself !!! 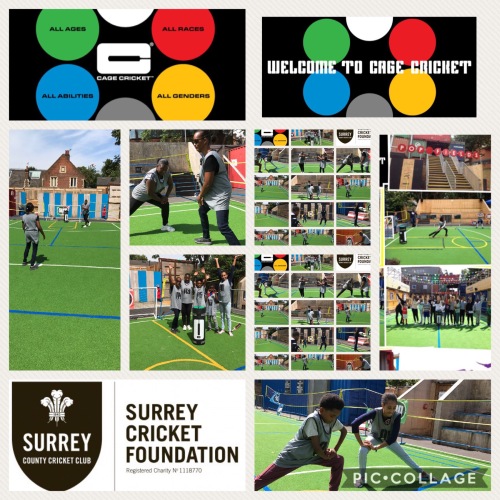 Fun was had by participants taking part in quick cricket and Cage Cricket.  Young people aged from 5 years old to 18 years old took part in sessions with coaches and they supported each other with great sportsmanship.

Parents watched their children taking part in the sessions and were happy that they were enjoying the cricket experience.

We look forward to more Mix and blend sessions with Surrey Cricket Foundation as part of their community engagement programmes.

Come and join us!! 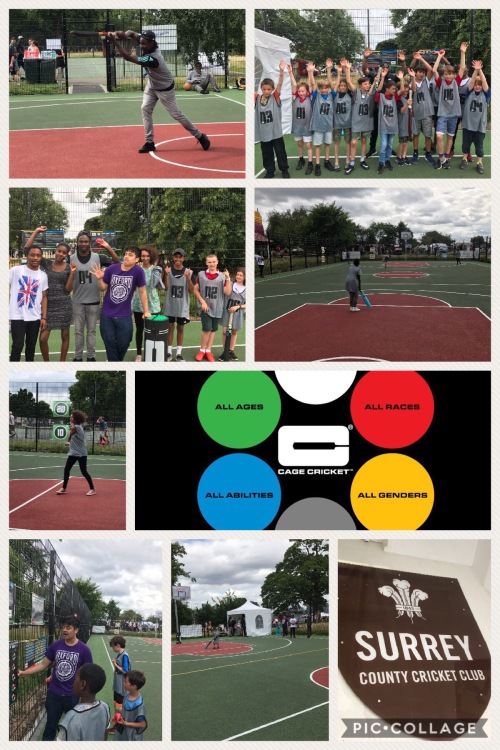 Brewster conducted a cage cricket session at Nondescript Cricket Club and here she poses for a photograph with some school students.Pic Kamal Wanniarachch

Sheromie Brewster, Head of Cage Cricket, London was in Sri Lanka to introduce game’s latest format to the island.

Sheromie Brewster, Head of Cage Cricket, London was in Sri Lanka to lay the platform for Cricket’s latest version to flourish in the island as she conducted a few cage cricket sessions along with some local coaches.

A game of cage cricket can be played indoors and outdoors where the scoring opportunities are determined by the specific zones. However, unlike in indoor cricket no running is involved in this format.

Having conducted some sessions at the Sinhalese Sports Club (SSC), Nondescripts Cricket Club (NCC), Colombo Cricket Club (CCC) and Piliyandala Town Sports Club, Brewster believes that there is a huge potential to promote the game in the country.

“The young people really enjoyed it and the coaches thought it was amazing. So that’s a great sign and now we look to create cage cricket hubs. I believe, this could be a huge success in this country” she told Sunday Island in an interview.

She also claimed that the organizers were planning to stage some cage cricket tournaments in near future in order to promote the game in Sri Lanka.

saying they’d talk to the coaches and find out their feedback to see how they can develop cage cricket in Sri Lanka,” stated the Head of Cage Cricket, London.

Sir Ian Botham, who is the President of Cage Cricket believes having just 13 rules for the entire game makes it easy to learn and promote. “The great thing about Cage Cricket is that it only has thirteen rules. It can be learned quickly and be played almost anywhere that there’s a confined space. With an ever growing obesity problem and shrinking participation in the parent game, I think now is the time to get behind such an innovative project and get more young people playing the game we love,” he has told the official website of cage cricket.

The Champion leg-spinner Shane Warne who ended up with 708 Test wickets is an ambassador for cage cricket.

Cage Cricket, a whole new format of Cricket is set to grace Sri Lanka as schools and clubs look to adapt to the new format.

Cage Cricket was founded in 2004 in the UK by Trevor McArdle and from the moment he discovered it, he knew he was onto something special.

Shiromie Brewster – Head of Cage Cricket London was in Sri Lanka the last three weeks with the intention of promoting this new format and the response she received was mind blowing.

“We have introduced this new format to clubs like SSC, NCC, Mahamaya College and Piliyandala Town Sports Club cricket academy and their response towards it was incredible we hope to take Cage Cricket towards rural areas and expand the reach of it”

ThePapare.com met with her to find out the manner in which the game is played. According to her, Cage Cricket can be played by players of any age with a team consisting of six players. It is played in an area equal to double the size of a practice indoor net.

What is Cage Cricket?

The game itself is simple and has a close relationship with the ethos of Basketball in having only 13 rules, but the spirit of cricket pervades the game and ultimately manifests in the Red Zone where each of the 6 individuals who play have to umpire and score the game for an equal part while fielding. This is revolutionary game theory and the outcomes are positive and numerous.

From a simple cricketing perspective, each player bowls, bats and fields for an equal time in an enclosed area and learns to perform under pressure. Sounds daunting, but it is actually great fun.

Cage Cricket is very similar to the indoor cricket area but there is no running involved. Points are scored when the ball is hit to certain zones by the batter. Each player gets a turn to bat, bowl and Umpire. Points can be added or deducted according to the area where the ball has been placed. 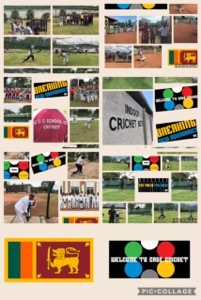 The latest form of cricket is cage cricket that was introduced to Sri Lanka last week. Sheromie Brewster, the Head of Cage Cricket in London is in Sri Lanka teaching the technique and rules and promoting the game with Sri Lankan youth.

Ceylon Today met Sheromie at the NCC Cricket Academy Indoor Nets to find out the manner the game is played. She said that it can be played by players of any age and a team consists of six players. It is played in an area equal to double the size of a practice indoor net.

It is very similar to the indoor cricket area but there is no running involved. Points are scored when the ball is hit to certain zones by the batter. Each player gets a turn to bat and bowl. Points can be added or deducted according to the area where the ball has been placed.

Cage Cricket, that was introduced in 2004 and has gained the backing of many high profile sports celebrities including legends Sir Ian Botham, Shane Warne and actor Colin Salmon. It has spread to many parts of the world including USA.

It breaks down traditional barriers to the participation in the sport for people of all abilities and has been designed to develop core life and social skills as well as cricketing competence.

The game has been piloted successfully in schools and communities across the World.

“It is always a pleasure to work with new contacts and deliver Cage Cricket for the first time and see how participants enjoy the benefits of Cage Cricket, batting, bowling, fielding and umpiring and how they support each other throughout the game. We look forward to more Cage Cricket being played around Sri Lanka,” noted Sheromie.

Trevor McArdle presented a plaque and Cage Cricket kit to students at the school as part of their student awards.

They are looking forward delivering more Cage Cricket around the school and with other schools. 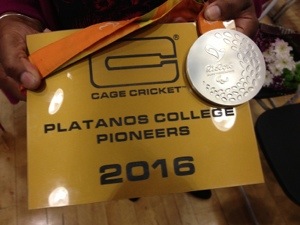 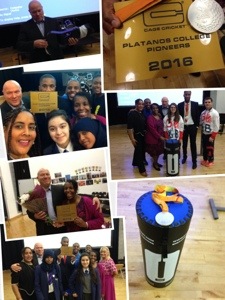 Cage Cricket Mix & Blend was enjoyed by participants at Pop Fields in Brixton and Ovaltastik Family Fun Day in Barbados over the summer.

We are looking forward to delivering more sessions so more people can enjoy the game of Cage Cricket for all age groups and abilities. 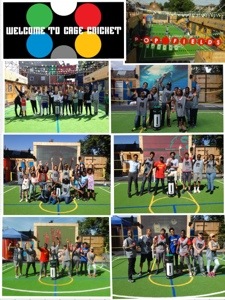